The European Central Bank’s news out this morning that they are restarting their bond-buying program has put a violent bid under gold (GLD). This bounce has investors in the metals complex proclaiming victory already in the miners (GDXJ), and many likely sure that the correction is over. I am less convinced that a 5-day pullback is all we need to reset sentiment from 8-year highs and believe that this is more likely a sucker’s rally. As long as the Gold Juniors Index stays below $40.40 on a weekly close, I would consider this rally as noise, and a bounce to lure in eager buyers.

The bulls are out in full force today mocking the bears, after the ECB’s early morning rate-cut. This rate-cut does have bullish ramifications for the metal long-term as negative rates continue to become a reality, but short-term, I’m less convinced that this news matters. Bullish sentiment on gold hit an 8-year high last month, and it’s quite rare for a trade this crowded to be unwound in only five trading days. While the correction for gold was sharp at roughly 4.5% off the highs, I do not believe it occurred over long enough of a period to grind down the bulls’ spirits. For this reason, I see the bounce in the miners as just an oversold bounce to suck in impatient money vs. the eventual low for this correction. Let’s take a look at both bullish sentiment and technicals to explain what I mean: 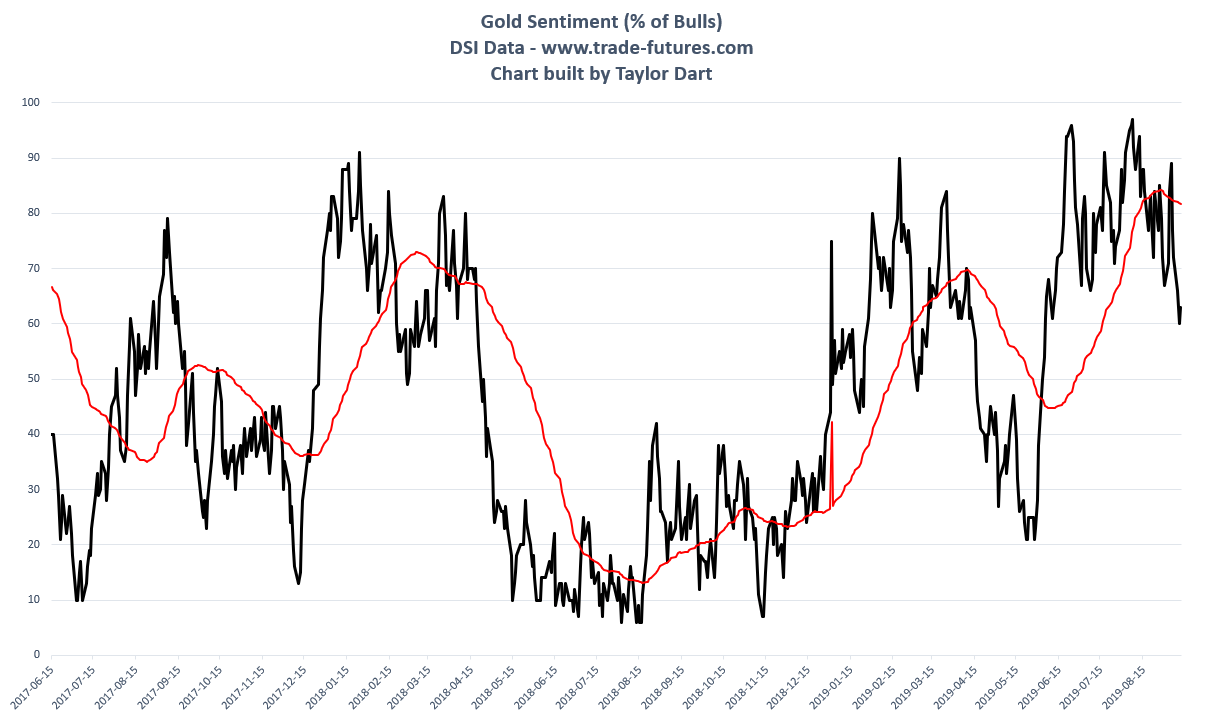 Looking at bullish sentiment for gold above, we are currently sitting at the 69% level. While this is an improvement from the 90% readings that we were getting almost daily two weeks ago, it would be rare for bullish sentiment to put in a cycle low at 63% bulls from Tuesday’s close. Anything is possible, and there’s a first for everything, but I believe it is highly unlikely. Generally, after a significant rush into an asset like we saw, it takes four to six weeks or a violent 10% plus correction to completely wipe out the sentiment in the bull camp. It’s certainly possible that a few very weak-handed bulls have given up, but I believe the majority didn’t even flinch during the correction that we just endured. For this reason, I do not think the probabilities suggest the low for gold holds at $1,490/oz, and I expect a lower low at $1,470/oz minimum.

Moving to the Gold Juniors Index, we can see that the index soared nearly 50% the past three months and has broken its parabolic uptrend line near the $40.00 level. This has left a new resistance level at the $40.40 level for the GDXJ, as well as a strong resistance level at $42.40. While bounces are possible amid this correction to remove oversold conditions, I believe that any rallies that can’t get through $40.40 are just noise. 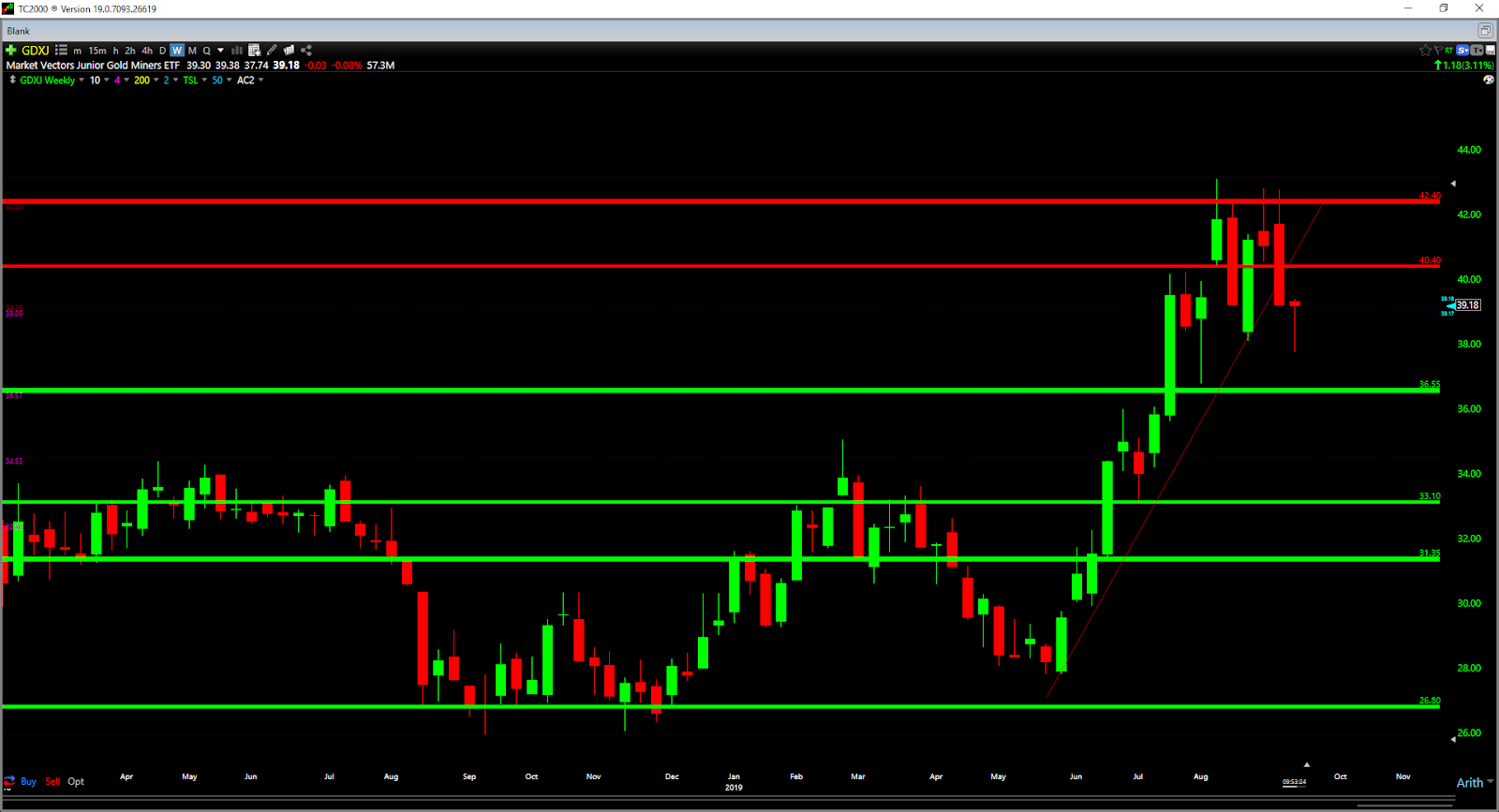 Strong support for the Gold Juniors Index comes in at $36.55, with significantly monthly support near $33.00. These are key levels for the bulls to defend, and a correction down to $36.55 would begin to clear out some of the bulls. For this reason, these are the levels I’m watching. While the bulls are out early proclaiming victory today and likely adding to positions if they hadn’t done so, I think this is the wrong time to be cheering. This bounce could continue for another day or so up to the $40.40 level on GDXJ, but ultimately, I expect 7% plus rallies to be sold into, and the lows to get re-tested or broken at $37.50 on the GDXJ. I remain bullish long-term on the miners (6-12 months), but I’m not sure the lows are in just yet.

GDXJ currently has an ETF Daily News SMART Grade of C (Neutral), and is ranked #10 of 33 ETFs in the Precious Metals ETFs category.

This article is brought to you courtesy of ETFDailyNews.com.

About the Author: Taylor Dart

Taylor Dart has over 10 years of experience in active & passive investing specializing in mid-cap growth stocks, as well as the precious metals sector. He has been writing on Seeking Alpha for four years, and managing his own portfolios since 2008. His main focus is on growth stocks outperforming the market and their peers. In addition to looking at the fundamentals, he uses different timing models for industry groups, and scans upwards of 2000 stocks daily to identify the best fundamental opportunities with the timeliest technical setups. Taylor is a huge proponent of Trend Following and the “Turtles” who enjoyed compound annual growth rates of over 50 percent per year..

Despite a Nosebleed Valuation, Nvidia Stock Is Still a Potential Buy
3 Reasons Why You Should Avoid Tilray (TLRY)
There Has Simply Never Been a Stock Like Microsoft Stock
Tread Carefully With Twitter Stock as It Approaches $40
Goldman Sachs is lining up Prince Harry for its online interview series