The Ford (NYSE:F) stock price has fallen 10% from its recent peak in mid-July since the company reported its earnings for the second quarter. Ford stock looks like it might be a bargain.  After all, the annual 60-cents-per-share dividend yields 6.3% and the forward price-to-earnings ratio is 6.8x.

But a closer look at the F stock dividend history and its Q2 cash flow statement shows that Ford could not afford its dividend during Q2.

Ford has already cut its dividend from last year. From 2016 through 2018, Ford paid five dividends each year. This included a special dividend at the beginning of each year on top of the normal quarterly 15-cent dividend. For example, Ford paid 73 cents in dividends during 2018, which included a 13-cent-per-share special dividend along with the normal quarterly 15-cent dividend. 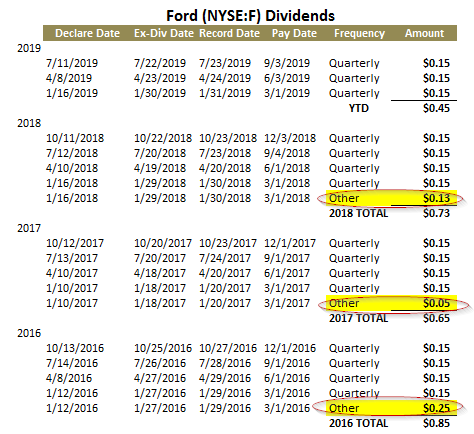 Free Cash Flow Does Not Support the Reduced Dividend

Ford’s adjusted free cash flow for Q2 was $200 million. This did not cover the dividend distributions, which were $600 million. This can be seen in the company slide presentation on pages 56 and 66 in its 10-Q report: 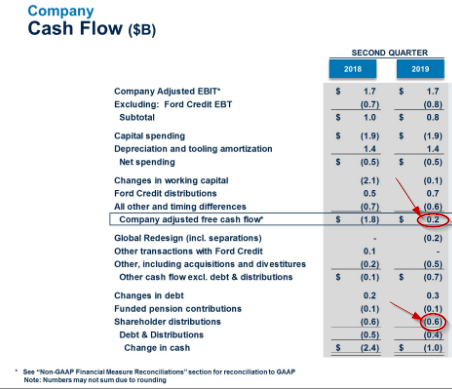 Now to be fair, Ford also could not afford its dividends in 2018 Q2. And Ford also reported $2.1 billion in adjusted free cash flow for the first half 2019, but its dividend only cost $1.2 billion.

But if it had not cut out the extra dividend payment in January, the cost would have been $1.8 billion as it did last year.  This can be seen in the table below: 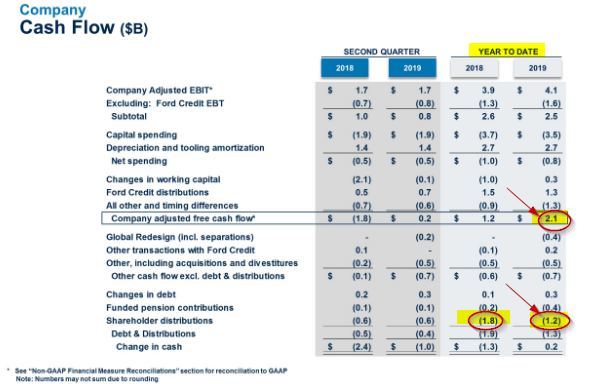 The largest use of FCF is capital expenditures (“capex”). This cost $3.5 billion in F’s first half. Ford stated in its 10-Q that its capital spending will be at least $7 billion a year through 2022. So there will be very little room in Ford’s FCF going forward for any kind of special dividends like it had from 2016 through 2018.

But on top of this normal capex spending, Ford has said in its 10-Q (page 64) it expects to have $11 billion in EBIT charges for Global Redesign actions as it shifts to electric and hybrid cars and trucks. Ford said the cash charges in 2019 will be $7 billion, including $1.5 to $2 billion in actual cash charges.

That leaves no room for funded pension contributions and debt principal reduction without lowering the cash balance.

What Investors Can Expect

F stock has a high dividend yield, but it may reflect the fact that Ford cannot to continue to pay the special dividends payments and may not even be able to afford the quarterly 15-cent rate.

The adjusted free cash flow figures it presented in its 10-Q statement call this into question. So if you think you are getting a bargain with F stock’s 6.3% dividend yield, you may be wrong. The company may have to reduce the dividend slightly if its Global Redesign efforts have to be ramped up even faster over the next several years. Otherwise it will have to reduce its cash balances to also pay for pension contributions and debt reduction.

As of this writing, Mark Hake, CFA does not hold a position in any of the aforementioned securities. Mark Hake runs the Total Yield Value Guide which you can review here.