It’s hard to find a bargain stock with dividends growing quickly. Often they are overvalued and not worth buying. Another problem is these kind of stocks can’t sustain the dividend growth. The trick to uncovering the best stocks to buy now is to search for fast-growing dividend stocks with low earnings-payout ratios. Even better if they’re cheap.

For example, fast growing tech companies reinvest their earnings in their business. They can’t afford to pay dividends without sacrificing growth. Amazon (NASDAQ:AMZN) has never paid out a dividend but is growing very fast. The stock is not cheap as investors rely on steady growth, but its investors are willing to forgo dividends.

Among the best stocks to buy now for value and income are business development companies (BDC). BDCs often raise their dividends at high rates, borrowing money or continually selling equity to finance dividend growth. Their payout ratios are high and the companies tend to be highly leveraged as a result.

Below are five stocks selling below 10x earnings whose dividends have been rising 15% or more per year. The companies pay out less than 30% of their earnings in dividends. They reinvest the rest to maintain consistent growth.

None of these stocks are turnarounds. They have been growing consistently for the past several years. You can rely on them to continue to increase their dividends at these rates. 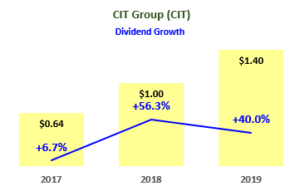 CIT Group (NYSE:CIT) is a bank holding company that has transformed itself into a vibrant, growing commercial lender after its demise in 2009. Earnings have been growing nicely as the company has divested itself of loss making divisions.

Analysts expect CIT to earn $4.96 this year. Its dividend represents just 28% of expected earnings. The stock now yields 3.1% and has a price-to-earnings ratio of 9.2x.

CIT has been simplifying its commercial lending business, selling off non-core units, and strengthening its capital ratios. Its recent stock buybacks and dividends increases show that this is a very shareholder friendly company.

Expect the company to continue to reward shareholders with consistent earnings and dividend increases. 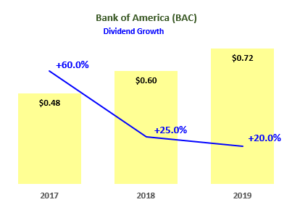 Bank of America (NYSE:BAC), the U.S. bank holding company, has increased its quarterly dividends over the past two years from an annual rate of 48 cents to 72 cents, paid in July. In addition, BAC has been showing good operational growth, despite interest rate headwinds.

BAC sports a 2.54% dividend yield and trades for just 10 times earnings per share. BAC reported Q2 earnings of 74 cents per share, which was up 17% over the past year.

BAC can comfortably afford its dividend. The 72 cents annual dividend rate represents just 28% of its expected earnings per share of $2.84 for this year.

BAC has a large and stable asset base with its consumer deposits and high earnings quality. It is well diversified with its Merrill Lynch brokerage arm, and an asset management business with $220 billion in assets under management. Their stable fees strengthen its lending business.

BAC has consistently grown its dividends. They rose 25% in 2018 and 20% in 2019. Expect the stock to continue to increase its earnings and dividends over the next year at a similar rate. 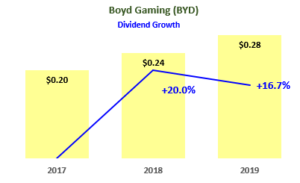 Boyd Gaming (NYSE:BYD) is a casino operator mainly focused on niche markets such as the local, non-Strip gambler in Las Vegas. Its revenue and earnings have picked up nicely over the past several years as U.S. economic growth, and disposable income, has grown.

BYD has increased its dividend 40% over the past two years. This includes a 20% increase in 2018 and recently 17% increase to 28 cents on an annual basis. This represents just 16% of its expected earnings this year of $1.78 per share.

BYD’s dividend yield is 1.15%. There is plenty of room for the dividends to grow as Wall Street expects that the company will continue to show consistent earnings growth. As sports betting picks up speed across new states, now that the Supreme Court has OK’d it, BYD expects to participate in the growth in that arena.

BYD is play on the economy continuing to steam ahead and the regional consumer’s willingness to dispose of income at BYD’s casinos. Expect the dividend to rise substantially over the next several years. 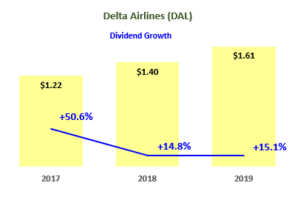 Delta Air Lines (NYSE:DAL) has increased its dividend by over 32% over the past two years. In 2018 the dividend rose 14.8% and recently DAL set the annual rate at $1.61, up 15.1%. The stock is a general play on economic growth as well as its moves to diversity earnings.

Delta’s recent Q2 revenues were up 9% year-over-year. Earnings shot up an incredible 32%. Analysts are especially optimistic about the new credit card that DAL is going to co-brand in partnership with American Express (NYSE:AXP).

The stock is still cheap, though. It trades at just 8.4x earnings which are expected to reach $7.10 for the year.

Given that its dividend rate is $1.61, the pay-out ratio is 22%. So there is plenty of room for the company to continue to increase the dividend. Moreover, the stock sports a very attractive dividend yield of 2.71%.

Investors can expect DAL to consistently raise the dividend over the next several years. 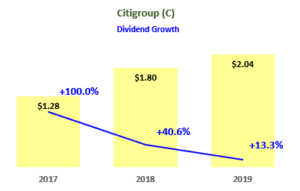 Citigroup (NYSE:C) has raised its dividend almost 60% in the past two years. The dividend was up 41% in 2018 and this year Citigroup has hiked it another 13.3%.

Citigroup is a play on strong economic growth in the U.S. The company has consistently produced solid revenue and earnings growth in the past 5 years.

The company is well positioned to withstand any interest rate headwinds, should rates continue to fall. Deposits and loans have continued to grow despite interest rate cuts. Revenue was up 4% in the first half of 2019 and net income rose 13%.

Citigroup’s stock trades for less than 9x earnings per share. The dividend yield is very attractive at 3.1%. This is more than investors can make in their money market accounts.

With the dividend set at $2.04, and earnings expected to be $7.64 this year, the payout ratio is only 26.7%. So there is still plenty of room for Citigroup to raise the dividend as earnings grows.

Investors can expect Citigroup to raise its dividend over the next several years at a similar rate in 2019.

As of this writing, Mark Hake, CFA does not hold a position in any of the aforementioned securities.

Why Luckin Coffee Stock Is a Silly Contrarian Play Right Now
Dow Jones Today: China Steps Up, Help on the Home Front
SpaceX is looking to raise about $250 million, valuing Elon Musk’s space company at $36 billion
Buffett watchers await word on whether the ‘Oracle of Omaha’ is close to finding his ‘elephant’
AMD Looks Too Bubbly in the Wake of Its Impressive Recovery