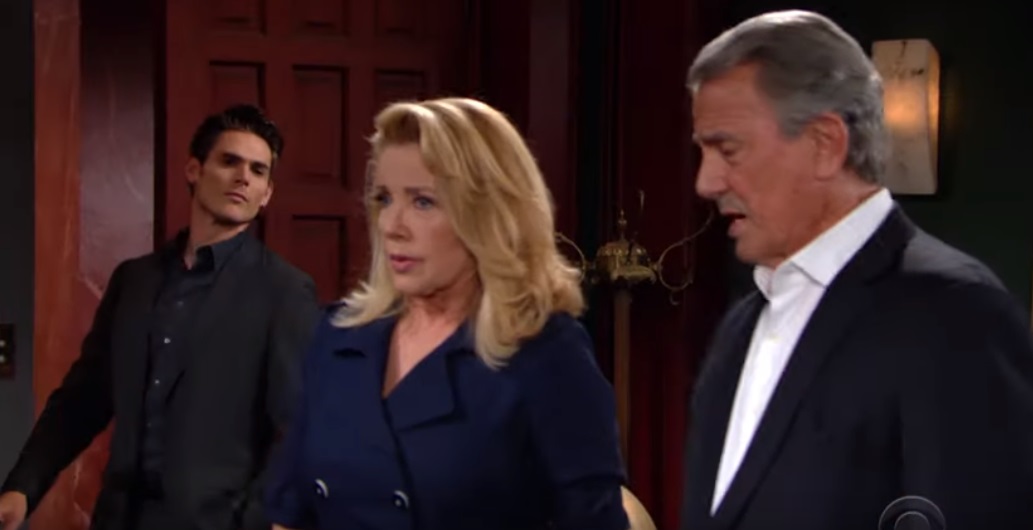 The Young and the Restless preview video for the week of August 26-30 promises a lot of bad blood and surprising reactions as old friends turned enemies come face to face. Then a will is called into question and a family prepares to battle one of their own.

Michael’s brother Kevin Fisher (Greg Rikaart) is not happy. Young and the Restless promo video shows him punching Michael in the face. The two brothers then share a verbal exchange where Kevin calls Michael a bastard.

But Michael sarcastically tells his brother it’s good to see him too, on the Y&R promo video. Kevin fires back and says, “If that were the case you wouldn’t have had my wife arrested!”

Chloe is released from police custody. The Y&R promo video shows that she comes face to face with her former best friend Chelsea Newman (Melissa Claire Egan). Chelsea is definitely not happy to see her. She lets Chloe know that while the law may have let her go, Chelsea was far from done with her former friend.

Y&R Spoilers: Where There’s a Will There’s Trouble

The Young and the Restless promo video shows Devon Hamilton (Bryton James) at a table with his girlfriend Elena Dawson (Brytni Sarpy). He’s reading a letter that he received from a lawyer.

He tells Elena that the letter is regarding some problems with his grandmother, Katherine Chancellor’s (Jeanne Cooper) estate. Devon wonders what’s going on.

Today on #YR, Chelsea cuts a deal, and Kyle and Lola look to the future. WATCH FULL EPISODE: https://t.co/zDKc2LXoXR pic.twitter.com/rjI1gEF2xJ

Adam Newman (Mark Grossman) decides he’s going to take down the whole Newman clan. The Y&R promo video shows him going to Newman Enterprises to let them know what he’s up to. He finds everyone gathered there together.

Nick Newman (Joshua Morrow) lets Adam know that he’ll never be a true Newman, according to the Young and the Restless promo video. Adam tells them that he’s going to enjoy destroying the entire Newman empire and watching them all suffer.

Victor Newman (Eric Braeden) tells his youngest son “Good luck.” as he walks out the door.  It looks as though Adam may have an ally in Phyllis. The Y&R video shows the two talking and it looks like Phyllis offers up some tips and advice.

Come back to Entertainment Chronicle for all Young and the Restless news and spoilers.