Sister Wives star Kody Brown seems to be racking up properties in his new hometown of Flagstaff, Arizona, as he emerges with two new pieces of land in his name. Records indicate that Kody Brown and his wives still own the four building lots in Coyote Pass. But it looks like the Sister Wives patriarch picked up a couple of more pieces of land elsewhere in Flagstaff.

Kody recently purchased more property with Coyote Pass still untouched by builders. This seems a bit mysterious. Is he planning to build elsewhere in Flagstaff besides Coyote Pass? Maybe that big house was a no-go on Coyote Pass so he found land elsewhere? Why does he need so much land in Flagstaff?

As you can see in the post below, Kody owns several properties today in his new town. The Flagstaff Assessors Office has seven pieces of land in Kody Brown’s name. Two are newly purchased, according to the online buzz today.

So if you read the list of Kody’s deeds it looks like if anything should happen to the husband of four and father of 18, each one of his wives will have a property of their own. That is all except for Meri Brown. As you can see in the assessor’s report below, each wife owns a parcel of land with Kody Brown. But Meri Brown appears on a deed with both Kody and Janelle Brown. 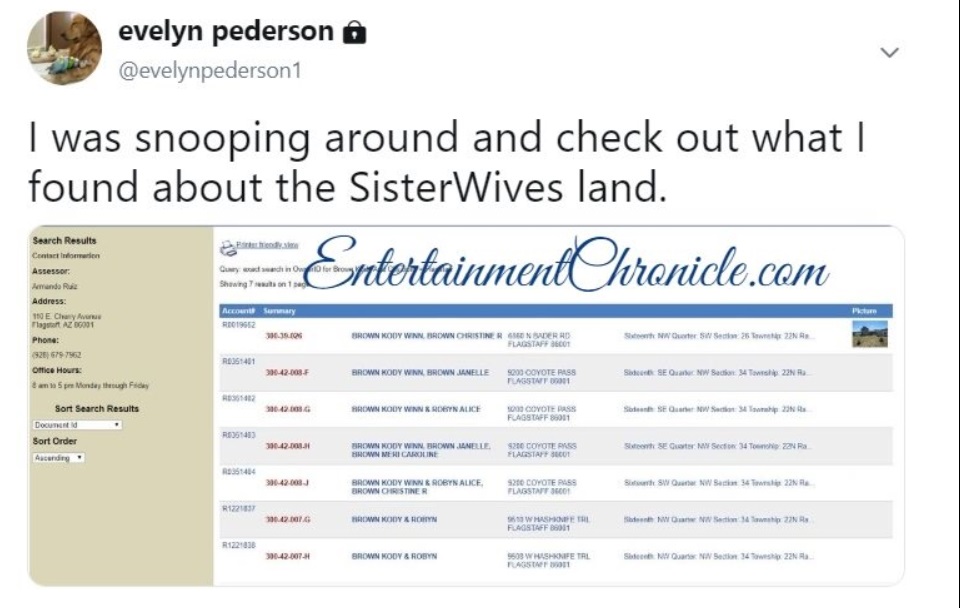 Meri Brown Gets Crumbs as Robyn Brown Set Up Nicely?

So that means if the wives every found themselves without Kody Brown one day they would all have their own property. Not Meri though, the one parcel with her name on it would fall to both her and Janelle.

Perhaps a clue about the dynamics of the Sister Wives clan also comes out of this city assessors list. It appears that only one wife owns the majority of the land with Kody Brown. That’s Robyn Brown, whose name appears on four of the seven property deeds with Kody. So what is all that about?

While Sister Wives viewers believe Kody tends to favor Robyn over the other wives, this seems to go overboard. So if the women find themselves one day without Papa Brown, it looks like Robyn is set for her future.

It’s not known why Meri Brown doesn’t own a parcel of land with Kody Brown like the other wives. It’s also not known why Robyn is the co-owner of four properties and the land isn’t divided up equally. Did Meri’s past mistake with an online relationship that blew up into the catfishing saga play into this decision?

There was a time when Meri and Janelle couldn’t ride in the same car together. The two just seemed to tolerate one another as seen in the video above. So it’s odd that Janelle is the co-owner of the piece of property on Coyote Pass with Meri’and Kody.

Sister Wives fans also got a glimpse of Christine Brown’s animosity toward Meri last season during that talk where Christine laid into her co-spouse. Any way you look at it, while Kody says he treats the wives equally as a husband, land ownership doesn’t seem to fall under that umbrella.

Maybe the new season, which is reportedly in the works today, will explain the purchase of the new properties. Maybe it also explains why Robyn is on four of the properties as a co-owner with Kody without the other three wives.

Come back to Entertainment Chronicle for all the news on reality TV and TV shows.