Sister Wives star Kody Brown prides himself on treating all four wives equally, along with treating all 18 of his kids without showing favoritism. But now and then something pops up that doesn’t fit that mold.

It’s hard to convince the die-hard Sister Wives fans that Kody Brown doesn’t have a favorite wife. So much has been said about his infatuation with Robyn Brown that’s hard to ignore. This went on from the first day she joined the show.

Many Sister Wives enthusiasts thought the novelty of a new and younger wife would eventually wear off. They thought he’d treat Robyn like the rest of his wives after the first year or two. But it doesn’t look that way after almost a decade. Fans witnessed this favoritism first hand again this last season.

Not only does Kody look like a man who favors his youngest wife, but many fans also believe Robyn’s kids are on the top of his list as well. Back when the Sister Wives clan made the move to Flagstaff, the family highlighted a few of the kids. One, in particular, was Gabriel Brown.

Gabe didn’t want to go and a few of his Sister Wives siblings shared the same sentiments about the move. They didn’t like it, not to mention they didn’t understand it. Gabe gave his mom Janelle Brown a hard time but the teen looked shaken up at the time. Kody didn’t seem to understand what his son was going through.

Instead of working with Gabe, the father of 18 basically took the stand that he’s the parent and Gabe was going… period. But he also jumped on social media and offered what sounded like a reprimand to his son. Then after all was said and done with the move, Kody hopped on Twitter to praise Robyn’s son for all his help. 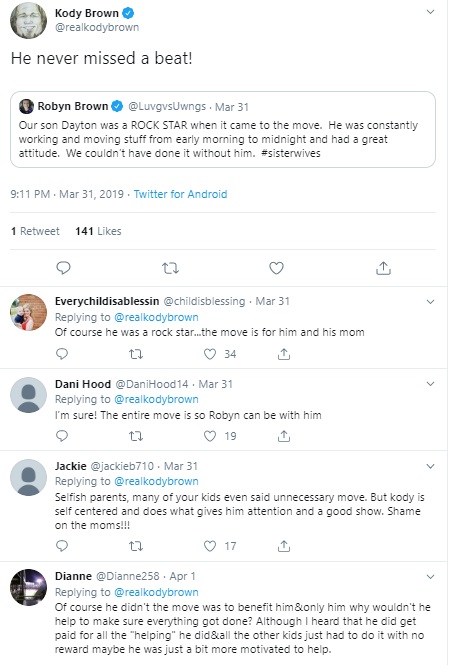 Robyn Drove the Bus to Flagstaff?

Robyn first tweeted – “Our son Dayton was a rockstar when it came to the move”. Kody retweeted the post saying “he never missed a beat”. Fans were all for giving Dayton Brown praise but… what about the other children who helped? The people who watched the TLC show knew the entire Sister Wives brood pitched in as a few episodes highlighted their move from start to finish.

When Robyn and Kody bypassed all the other kids and gave kudos to Dayton, the fans became furious. While the young man sounded as if he earned the praise, fans thought the other kids needed mentioning as well. Sister Wives fans were already raw by this time because it was reported previously that Dayton enrolled in a college located in the Flagstaff area.

It didn’t take long for the Sister Wives followers to put two and two together and the theory emerged suggesting the Flagstaff move was due to Robyn. Fans thought the precursor to the move was Robyn’s need to be near Dayton while he attended college.

Even in the blueprints for that giant house that Kody wants to build on Coyote Pass, a concession was made for just one of the kids. Kody added two master bedroom suites in Robyn’s section – one, of course, was for Robyn. But the other was for the kid who will live with them while attending college. Fans knew who he had in mind despite no names mentioned.

Today the family seems fractured going by their social media presence. Kody doesn’t show up anywhere these days. It seems the Sister Wives ladies haven’t mentioned him on social media at all lately.

Meri Brown appears to have gone her separate way. She doesn’t admit to that but her online posts scream independence. Both Janelle and Christine Brown seem busy with their kids, again going by their online posts. Gone is the interaction that once was frequent between the spouses and Kody online.

Reports put Kody spending most of his time with Robyn Brown, who mysteriously rolled up her online welcome mat. She remains quiet online since the beginning of the year. So did Kody and Robyn Brown finally make that move as a full-time family of seven when they moved into their new Flagstaff home?

The home they just purchased together a few weeks back looks like a piece of a luxury property. It should be since it came with the price tag of just under a million dollars.

Why would they purchase this mansion nestled in the woods if their original plans of building their homes on Coyote Pass were still intact? It looks like the hints and clues coming from Kody and Robyn all these years may have something to them after all.

Meri Brown offers the biggest clues as she looks to be enjoying a single life these days. Did the family finally splinter off now that all the kids are getting older? After all, the only little ones in the family belong to Robyn.

Come back to Entertainment Chronicle for all the news on reality TV and TV shows.