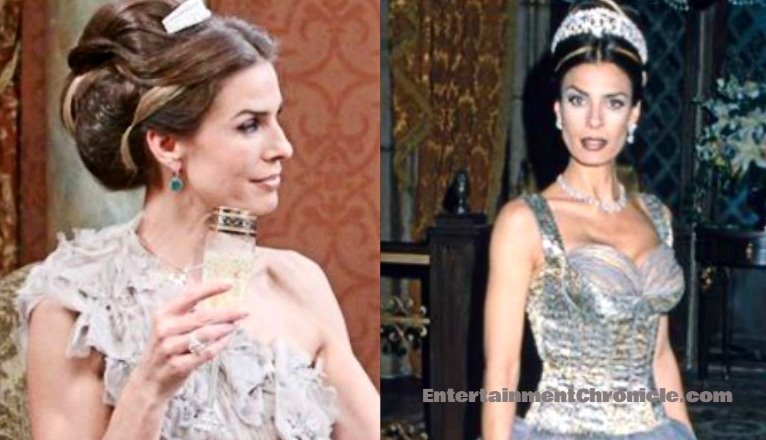 Days of Our Lives fans wonder who is Princess Gina Von Amberg on DOOL. The character of Princess Gina Von Amberg was created in 1999 and portrayed by Kristian Alfonso. Gina was married to the late Prince Philip Von Amberg. She’s the mother of Greta Von Amberg. She’s had romances with Bo Brady (Peter Reckell) John Black (Drake Hogestyn), and Stefano DiMera (Joseph Mascolo). Gina was involved in numerous crimes which include art theft, forgery, attempted murder and the kidnappings of Hope Brady and Stefano DiMera.

Days of Our Lives: Princess Gina Was A Pawn Of Stefano DiMera

Princess Gina was one of Stefano’s pawns. He used her to steal and forge art. After John Black was believed to have died Gina went into a depression and refused to paint for Stefano anymore. She went into seclusion in a castle in Europe. In need of a replacement, Stefano brainwashed Hope Brady to believe she was Princess Gina. Stefano lured Princess Gina to Maison Blanche with the promise that he could cure her depression. He instead locked her in a castle turret at her house, Chateau de Reves, in Paris. Gina began going mad until her daughter Greta Van Amberg ( Juliane Morris) arrived. After the visit, Gina began reclaiming her mind and life.

Her manservant, Kurt, allows Gina to attend a ball thrown in her honor, where Hope was acting as Gina. Then Gina, posing as Countess Elsa Schwengel, came face to face with her imposter. While talking with Hope she discovered her true love John was alive and living in Salem. So, Gina lured Hope to her chateau and locked her up. Gina had plastic surgery to look like Hope. Then she headings to Salem to reclaim John Black as her own.

Days of Our Lives: Princess Gina Takes Salem By Storm

Once in Salem, everyone believed Gina was Hope, not knowing that Hope and Stefano were being held prisoner at Gina’s chateau. When Gina realized that John Black would never leave Marlena Evans (Deidre Hall) she focused on having a relationship with Bo Brady. They planned to marry on New Year’s Eve in 1999. On the wedding day Gina, attempted to shoot Marlena and Shawn Douglas Brady (Brandon Beemer) As she and Bo struggled for the gun, she was shot. She died on January 14, 2000. It’s revealed, by Lili Fayersham, that the woman who was shot was Gina, not Hope. The woman who was shot had a scar and Lili identified it as Gina’s scar. Once Stefano and Hope were found, Gina was officially laid to rest.

Gina’s ghost appeared in 2001, to her daughter Greta, while she was completing the tasks to become the new official Princess, taking her mother’s place. Gina once again appeared in March of 2012 when Stefano coaxed her out of Hope’s memories. He needed John and Hope, with Gina’s memories, to steal back a stolen Faberge egg. Princess Gina also appeared during the Halloween special dream-sequence episode on October 31, 2017.

Princess Gina will soon be seen again as Dr. Rolf’s “experiments” with Hope once more.