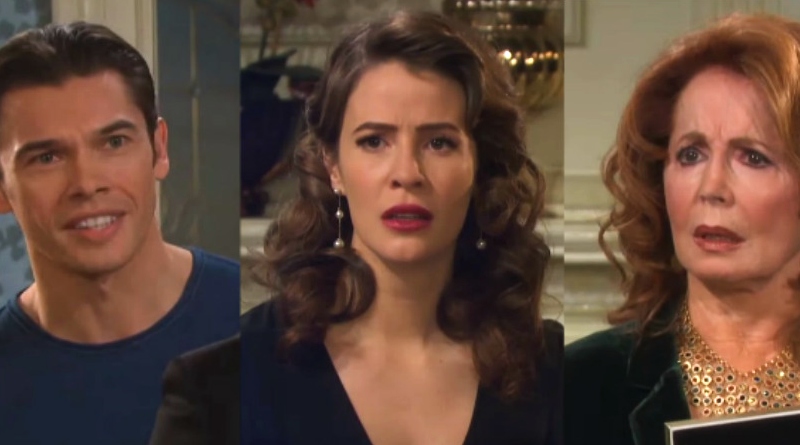 Days of Our Lives spoilers from the hot new weekly promo video reveal Xander Cook (Paul Telfer) admitting to Maggie Horton (Suzanne Rogers) and Sarah Horton (Linsey Godfrey) that Holly Jonas (Harlow and Scarlett Mallory) is alive. It’s a shocker to the two Horton women. Certainly, the news is joyous. However, their joy turns to other emotions as they realize Xander’s role in the plan. The reformed con man is certainly in the hot seat this week on the NBC soap.

DOOL spoilers show Xander Cook faces the wrath of both Maggie Horton and Sarah Horton. He faces the music and admits his part in Kristen DiMera’s (Stacy Haiduk) diabolical plan. The truth is Holly is alive. The news doesn’t get the reaction Xander hoped. Of course, they are thrilled their sweet Holly is alive. However it’s Xander’s blatant lies over the last few months the Horton women cannot get past. In fact the emotion they feel most is betrayal.

DOOL spoilers recall it was Holly’s “death” that pushed Maggie over the edge and back to the bottle. Decades of sobriety lost over Kristen’s need to get  Brady Black (Eric Martsolf) in her bed. Additionally, Maggie formed an odd friendship with Victor’s nephew. She grew to care about him almost like a mother figure. So, his lies cut her deep. And let’s not forget Xandr has the hots for Sarah. Well, his part in Holly’s faked death is not scoring him any brownie points with the sexy doctor.

Days of Our Lives spoilers tease Xander Cook will go to great lengths to get back in the good graces of Maggie and Sarah. With Kristen in police custody and looking to cut a deal of her own, now is Xander’s time to act. Certainly half of Salem will head to Chicago seeking to find the toddler. However, if Xander can beat them all to the punch, he can be the hero in all this. Frankly, he has nothing to lose and everything to gain.

Days of Our Lives spoilers suggest the entourage in Chicago is in for a few shocks when they arrive. One of which is that Nicole Walker (Ariane Zucker) is alive as well. Certainly, that doesn’t bode well for Sarah and Eric’s recent commitment to each other. Sarah is not the love of Eric’s life —that’s definitely Nicole. So, Sarah just might find herself the odd woman out. And that means Xander Cook stands a chance to worm his way back into Sarah Horton’s heart and bed.