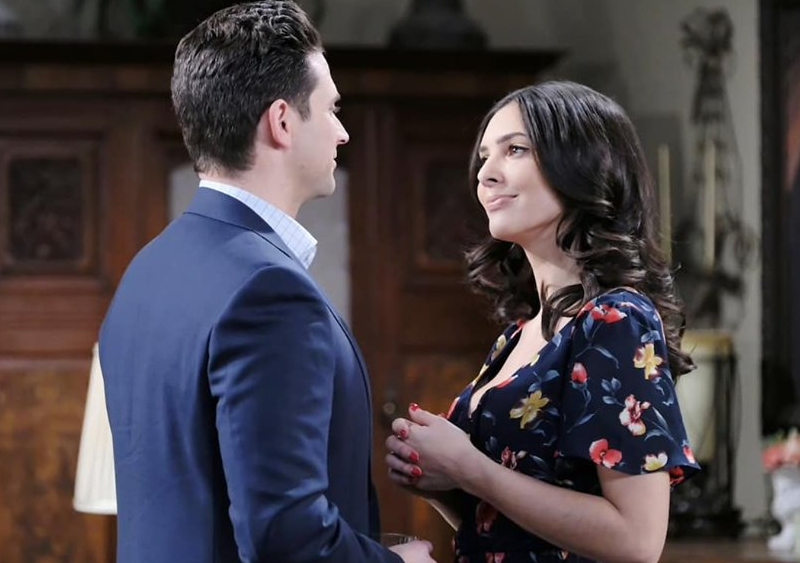 Days of Our Lives spoilers reveal Stefan DiMera (Brandon Barash) and Gabi Hernadez (Camila Banus) are finally found. The newlyweds were knocked out by Stefan’s deranged sister Kristen DiMera (Stacy Haiduk). Then she stashed them in the secret room at the mansion while she figured out what do do with them. However, she was arrested after being outted as fake Nicole by John Black (Drake Hogestyn) at his anniversary party. So, Gabi and Stefan were the last things on her mind. Thankfully her baby daddies Will Horton (Chandler Massey) and Sonny Kiriakis (Freddie Smith) were able to crack the case this week on the NBC soap.

Days of Our Lives Spoilers: Stefan DiMera And Gabi Hernandez  Admit They Are In Love

DOOL spoilers confirm Stefan DiMera and Gabi Hernandez finally come clean with each other. While locked away in the DiMera wine cellar the two are forced to admit they fell in love. What started out as hate turned to love. Afterall there’s a fine line between the two and this couple crossed it. This realization takes the couple by surprise. There’s is no denying the off the charts chemistry for this couple. Fans have rooted for them for months and now it looks like their wishes were granted.

DOOL spoilers remind Gabi’s original plan was to get revenge on Stefan for his part in framing her for Andre DiMera’s (Thaao Penghlis) murder. Thanks to Stefan Gabi was sent to prison and beat to inches of her life. These injuries likely robbed the young mother of one from ever being able to carry another child to term. Gabi’s plan was to seduce Stefan, get him to marry her, then wipe him out financially. However along the way she developed real feelings for the person she claimed she hated most. However, after they married, she was his strongest defender after his erroneous arrests for kidnapping and murder.

Days of Our Lives spoilers show Stefan and Gabi are rescued from the tunnels soon. Will and Sonny are back at it playing detective and crack the case. Things just did not add up with Gabi’s behavior and that set the newlyweds into motion to figure out why Gabi went MIA. They were first tipped off that something was amiss when Sonny told Will Gabi wasn’t responding to texts or calls. Since she always has her phone with her like a body part, they immediately knew something was wrong. And of course, if anyone goes missing in Salem, it makes sense that the first place to look would be the tunnels under the DiMera mansion.

Days of Our Lives spoilers tease that Tony DiMera was the one who confirms the location of his brother and sister in law in an attempt to cut a deal of his own. Looks like his information on where his crafty sister stashed the other DiMeras was enough to get him freed. However, it’s Wilson that shows up to rescue the couple. Now the newlyweds are forced to deal with their admission of love and no doubt the challenges that await them in the weeks to come.