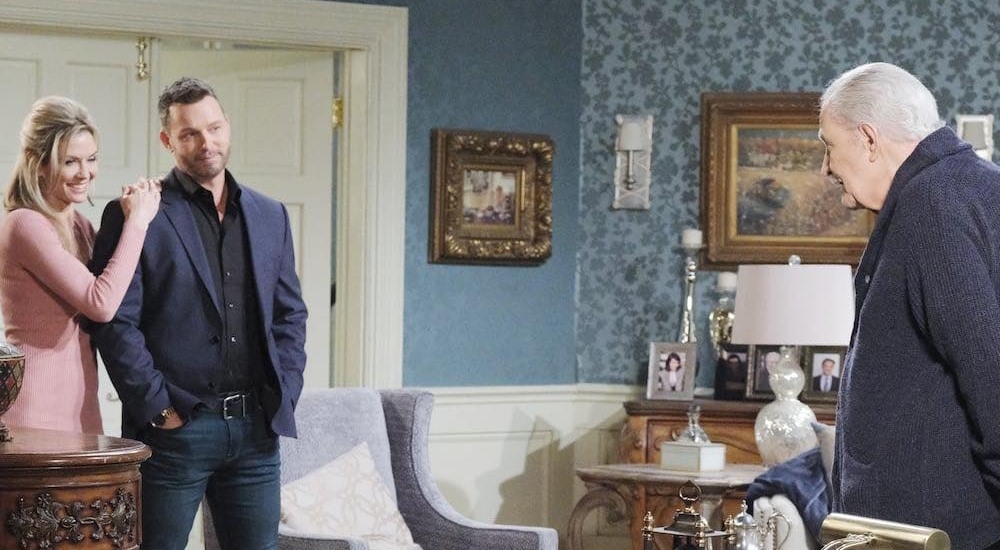 Days of Our Lives spoilers promise Brady Black (Eric Martsolf) has news that will make his grandfather Victor Kiriakis (John Aniston) come unglued. Brady has come to terms that Kristen DiMera (Stacy Haiduk) is in fact pregnant. He’s already shared the not so good news with his stepmother Marlena Evan (Deidre Hall. So now he must tell his grandfather the news. Certainly, Victor will not be happy to learn that his great-grandchild will be the spawn of psychotic Kristen DiMera. However, that’s not the only bomb Brady Black drops on Victor Kiriakis this week on the NBC soap.

DOOL spoilers reveal Brady Black faces the music and comes clean with his granddad. No doubt the news he shares is not well received. It’s well known Brady’s love life has been a series of train wrecks. However, this latest development is one for the record books. Additionally, the consequence is life-altering. Brady already told his parents the news that Kristen is carrying his baby. Now he tells the one person who opinion and respect he values most—-his grandfather.

So, Brady brings Kristen with him to the mansion to tell Victor about their baby on the way. Of course, Victor loses his cool. A Kiriakis heir with a DiMera is not news that goes over well. Victor no doubt lays into Brady for his irresponsible behavior. However, that’s not the only news Brady has. He informs Victor that Kristen is moving into the mansion. Victor’s house is turning into a maternity ward these days. And ironically neither momma to be he likes him very much.

Days of Our Lives spoilers show Kristen’s stay at the Kiriakis mansion will not be as she envisioned. Brady lays down some serious ground rules. For starters, they will have separate rooms. He’s moving her in to make sure the baby is taken care of. He puts her on notice that they are not playing house and there will be no nookie. Of course, Kristen doubts Brady can stay out of her bed. He’s weak when it comes to her charms.

Days of Our Lives spoilers remind Brady Black has proven to be a great father to his son Tate with ex-wife Theresa Donovan ( Jen Lilley). However, Tate’s living in California with his mom. So Brady misses terribly being a dad on a daily basis. The new baby will fill a void for Brady. There’s no doubt that he will step up and be a good father to this child. However, make no mistake, Kristen will do all she can to manipulate and guilt Brady into being with her and use her own child as a pawn.