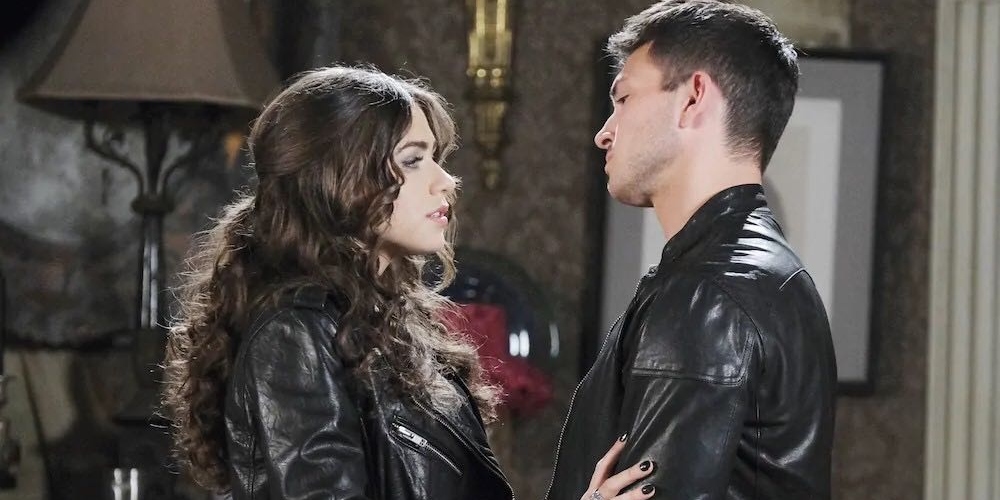 Days of Our Lives spoilers reveal both Ben Weston (Robert Scott Wilson) and Ciara Brady (Victoria Konefal) believe Jordan Ridgeway (Chrishell Strasse) is responsible for the latest attempt on Ciara’s life. Jordan has made veiled threats to Ben about Ciara’s safety. So when a car out of nowhere nearly mows her down Ben starts to connect the dots. All signs show this was the work of his crazy sister. So now it’s time for Ben to come clean and share his concerns about Jordan with Ciara. This week Ciara and Ben seek the help of the Salem Police Department to keep Ciara safe on the NBC soap.

DOOL spoilers remind Jordan Ridgeway kidnapped and nearly killed Ciara Brady last year. She did this to protect Ciara from Ben. Clearly she has a warped sense of what it means to protect someone. Certainty killing Ciara would not keep her safe from Ben. So Jordan was sent to Bayview for psychiatric treatment. However seems she tricked the doctors into thinking she’s sane. So now she’s back in Salem and it looks like her plan to protect Ciara from her brother has once again kicked into high gear according to Days of Our Lives spoilers.

Jordan: I just know something really bad is going to happen to that girl. Something really awful. I’m genuinely afraid for her life.
Ben: Did you juts threaten Ciara?
THIS SCENE!! #Days pic.twitter.com/dCqvvFErvB

Days of Our Lives spoilers show Ben Weston kept Jordan’s threats from Ciara. However, he did talk with Dr. Marlena Evans (Deidre Hall) about his concerns. She was of no help. So Ciara’s safety was left in his hands. But now that Jordan’s threats seem to have taken a turn to actions. So Ben decides it’s time to share his suspicions with Ciara. Of course, Ciara being the daughter of two career cops informs Ben that they must let the police handle this matter.

Days of Our Lives spoilers say Ben and Ciara waste no time bringing their suspicions to Detective Lani Price (Sal Stowers). Although Lani is concerned and wants to help, her hands are kind of tied. Seems that suspicions are not enough for the police to get involved. So until they can prove Jordan is behind the attempted murder or Jordan actually does something dire, CIN is left to take Jordan down on their own.

Today on days!
• Ben and Ciara are shocked when they find out Jordan is back #Cin #Days ❤️❤️❤️ pic.twitter.com/fYJOLQzZhL

Eventually, Jordan will slip up and her crazy will show. She’s living at Rafe Hernandez’s (Galen Gering) house with her son David Ridgeway (Ellis twins). It’s only a matter of time before Rafe starts to see Jordan’s mental stability is questionable.