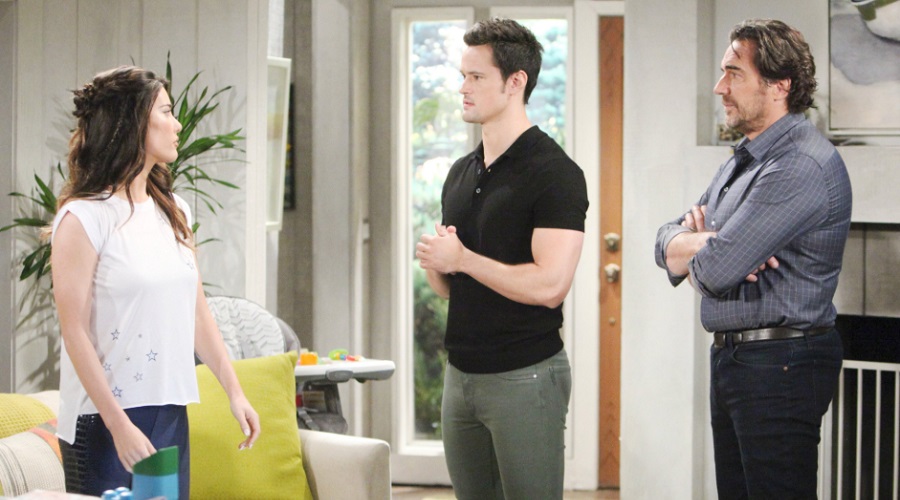 Bold and the Beautiful spoilers suggest Steffy Forrester (Jacqueline MacInnes Wood) soon finds anger fueling her moves thanks to dad Ridge Forrester (Thorsten Kaye). It’s a little too late for Ridge to fix the problems haunting his adult children but he takes a hiatus from his marriage to try.

Bold and the Beautiful Spoilers: Steffy Forrester Rages With Anger

Since his wife Brooke Logan (Katherine Kelly Lang) won’t stand with him, he takes this journey on his own. B&B spoilers indicate one of the first battles Ridge attempts to conquer is between Steffy and her brother. He sets out to create a truce between his kids.

Thomas Forrester (Matthew Atkinson) has his father eating out of his hand but he’s about the only that buys his conniving today. The devious Forrester son already has visions of taking over Forrester Creations one day as his “birthright”. Now with his dad backing him, he struts back into FC. He’s expected to step Steffy’s toes a bit in the up and coming episodes.

Bold and the Beautiful spoilers say Thomas is overly enthused to start his move up the ladder when Ridge throws him back on the job at Forrester. Steffy has been at the helm while her brother was across the Atlantic.

Steffy Forrester maintained her top position when Thomas returned back home and did nothing but raise havoc. So she sees this move as a slap in the face. B&B spoilers indicate while Thomas settles behind his desk back at FC, Steffy’s fury grows.

It seems Ridge continues to have blinders on when it comes to Thomas. Bold and the Beautiful spoilers suggest Thomas continues his birthright path at FC as the episodes roll along. But this only adds more fuel to Steffy’s fire. It looks like Thomas also continues his ploy of showing two different personalities.

One personality is especially fine-tuned for his father and the other is for anyone who gets in his way. B&B spoilers suggest that Steffy can only take so much before she boils over.

The forgive and forget mood she’s had to embrace for so many things lately will temporarily be suspended. The spoilers say the young mom does a turnaround. She’s soon out for number one first.

Bold and the Beautiful spoilers claim Steffy resists reuniting with her brother, much to the disappointment of Ridge.

Much to most everyone’s disapproval, Thomas lands back into the thick of things. First of all, there’s Hope Logan (Annika Noelle). Thomas is the last person she needs to be around.

B&B spoilers suggest Brooke will attempt to make that clear to Ridge but again he barks back how this is his son who has a right to be there.

Bold and the Beautiful Spoilers: More Salt Rubbed in the Wound

Bold and the Beautiful spoilers also point out that Ridge remains out of the home he shared with Brooke. So her clout with her husband is somewhat diminished. Hope is bonding with Beth Spencer (River Davidson and Madeline Valdez) after all the time she lost. So she asks Steffy for some time off to do so.

The old Steffy would remember her time with Kelly Spencer (Zoe Pennington and Chloe Teperman) when she first came home from the hospital. That Steffy Forrester would be more than happy to do it. But a lot of water has gone under the Bold and the Beautiful bridge.

B&B spoilers hint that maybe Steffy remembers bonding with Phoebe and losing that bond to Hope. This has been a year of losses for Steffy and she struggles in silence before rage wins out.

Bold and the Beautiful spoilers predict that Steffy grants Hope’s request but she may also decide to put Hope for the Future aside as well.

Come back to Entertainment Chronicle often for all of your Bold and the Beautiful spoilers and updates.