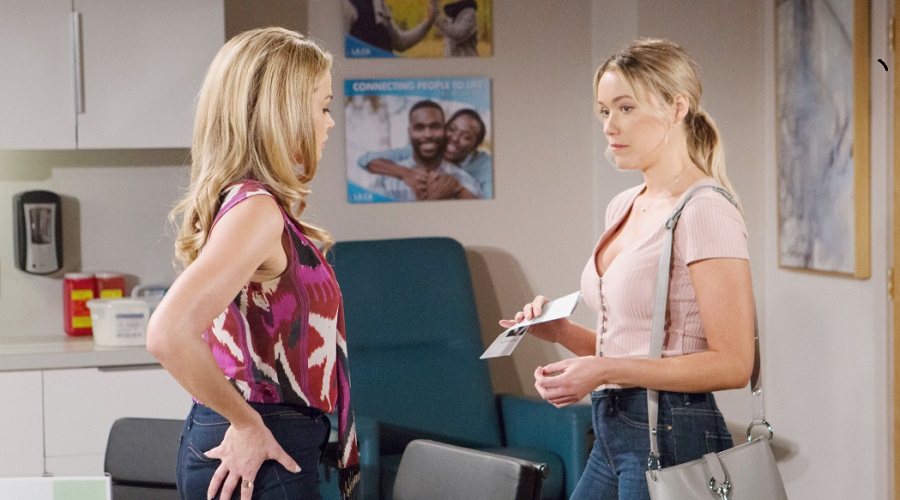 Bold and the Beautiful spoilers have Shauna Fulton (Denise Richards) manipulating her daughter Flo Fulton (Katrina Bowden) which sets her up for a fall. It seems the only thing Shauna sees is acceptance by the elite group in town and it looks like she plans to do this through her daughter. The only thing Flo can see is Wyatt Spencer (Darin Brooks) but that’s such a hazy vision today.

B&B Spoilers indicate Shauna continues to pave a road to redemption for Flo with images of how the Logan sisters will embrace her once again. After she was tested this week as a possible kidney donor for Katie Logan (Heather Tom) it seems the news soon arrives that she’s a match.

Bold and the Beautiful spoilers have Shauna doing a number on her daughter as this week rolls along. Shauna puts visions of not only the Logan family opening up their arms to her but Wyatt Spencer (Darin Brooks) giving her a second chance as well.

B&B Spoilers: Flo Reels Herself In But Not for Long

While Shauna paints a picture of love and acceptance coming from the Logan family, Flo takes a step back. Bold and the Beautiful spoilers suggest Flo wants to save Katie’s life but for her, it’s not a tradeoff for a kidney.

She wishes the circumstances didn’t put her at odds with her new-found family. But she also doesn’t want to use her kidney donation as a way to slip back in, unlike her mother.

Today on #BoldandBeautiful, Shauna tells a lie about Ridge. pic.twitter.com/KeQyYNw2y2

Flo showed many examples of being able to empathize with people in previous episodes of B&B. Especially when she was behind bars. She didn’t blame anyone for wanting her there. She felt she deserved it.

Flo also understood why the Logan family and their extended kinfolk turned away from her. But Shauna didn’t. She doesn’t see the scope of the crime her daughter committed.

Bold and the Beautiful Spoilers: Pride Comes Before the Fall

So, it seems B&B spoilers say Flo almost falls for her mom’s enthusiast dream of trading a kidney for a ticket back into the Logan clan. If anything at all might dance in Flo’s head is the thought of getting back together with Wyatt.

But Bold and the Beautiful spoilers have Flo coming to her senses just in time. Once she finds out she’s a match she agrees to the kidney donation with one contingency. She wants to remain anonymous.

Katie is holding out for hope and holding on for life this week on #BoldandBeautiful. pic.twitter.com/z18jcikFQa

B&B spoilers paint Shauna seething over Flo’s decision. Her plans of becoming part of the LA elite don’t fit in with Flo’s new plan. While Shauna sounds as if she’s thinking only of her daughter’s future, her plan is to ride Flo’s coattails into a better life.

Bold and the Beautiful spoilers describe all goes well with both Flo and Katie’s surgeries. While the women recover, Katie, along with the rest of the Logan, Forrester, and Spencer family members still don’t know who the donor is.

When Katie is feeling better her insistence on meeting the donor might just cause the reveal of Flo. B&B spoilers indicate this might have something to do with Shauna who finds a way for Flo’s name to be revealed without revealing it herself.

But if Shauna waits with bated breath for the joy and gratitude to flood in, she may be wrong. It looks like this reveal first sparks anger. As overjoyed as the family members are to have Katie alive, they feel blindsided again, suggests the B&B spoilers.

It looks like Shauna set Flo up for another fall in life as Mommy Dearest watches out for number one. This may send Shauna back to the drawing board as she seems to be a woman who usually gets what she wants.

Be sure to come back to Entertainment Chronicle for all the Bold and the Beautiful spoilers and news.