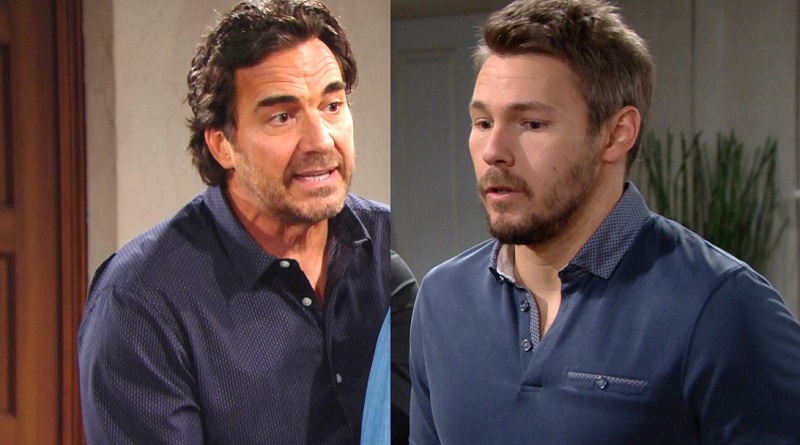 Bold and the Beautiful spoilers say that Ridge Forrester (Thorsten Kaye) is going to spread his pain around next week. Not only will his wife Brooke Logan (Katherine Kelly Lang) bear his wrath, but he eyes his former son-in-law as well. Liam Spencer (Scott Clifton) finds he’s a target for Ridge’s wrath.

B&B spoilers speculate that Ridge’s anger zeros in on Liam because he left his daughter Steffy Forrester (Jacqueline MacInnes Wood) alone with her pain when the truth about Beth surfaced.

He thinks Liam is partly to blame for Steffy’s pain because he wouldn’t let things go. Even though it was Ridge’s grandson Douglas Forrester (Henry James Samiri) who really revealed the truth about baby Beth Ridge still feels that Liam bears some responsibility.

The spoilers for next week’s episodes of Bold and the Beautiful say that Ridge also feels like Liam doesn’t belong with Hope Logan (Annika Noelle). The irate father feels like Liam has no loyalty to Steffy and Kelly, who are his first family.

Separately, Ridge and Brooke race against time to get to Hope before Thomas does. WATCH FULL EPISODE: https://t.co/pBbNzzkhQM #BoldandBeautiful pic.twitter.com/pjl4PFsChH

Bold and the Beautiful spoilers indicate that Ridge holds Liam responsible for Thomas Forrester’s (Matthew Atkinson) unhappiness. All he wants is for his children to be happy and have what they want and need.

He thought Hope would be a good mom for Douglas. Ridge also believed that Liam belongs with Steffy. What Liam wanted doesn’t seem to matter. The fact that Liam isn’t in love with Steffy anymore seemed not to matter to Ridge.

The same could be said for Hope and Thomas. B&B fans could clearly see that Hope didn’t love Thomas. While Ridge didn’t push the couple together, he also didn’t do anything to stop this.

He watched his over-anxious son push a grieving and confused Hope down the aisle. He knew it was a marriage she was clearly not ready for and didn’t want.

Unsure of where he is hiding, Brooke and Liam worry that Thomas will go to any length to reunite with Hope. WATCH FULL EPISODE: https://t.co/YVujNoGlcj #BoldandBeautiful pic.twitter.com/wmwDBrVzfM

Bold and the Beautiful Spoilers: Raging Father Gives Liam Piece of His Mind

B&B spoilers hint that when Ridge and Liam come face to face, this fuming father is going to verbally let loose on Liam. It seems he places the blame for what has happened to both of his children squarely on Liam’s shoulders.

Ridge will want to know how Liam can be so happy while Steffy is miserable.  Steffy’s dad also suggests this isn’t fair to Kelly as well. Bold and the Beautiful fans can bet Ridge will let Liam have it with both barrels.

It looks like Ridge will accuse Liam of being the reason that Hope wants an annulment from Thomas. It’s clear that Ridge is having a tough time accepting the role that Thomas played in all of this. Bold and the Beautiful spoilers suggest he’ll want to look for someone else to blame.

Bold and the Beautiful spoilers speculate that Liam won’t take Ridge pointing the finger at him laying down. Liam is going to point out to Ridge that his son lied and manipulated Hope and Douglas. He will also remind Ridge that Thomas hurt both him and Hope by keeping the secret that Beth was alive.

Bold and the Beautiful fans can be sure that Liam will let Ridge know that he never promised Steffy a reunion while he was living there. She knew that he still loved Hope and wanted her back. B&B spoilers indicate Liam assures Ridge that his children come first.

Come back to Entertainment Chronicle for all the scoop on Bold and the Beautiful and other soaps as well.