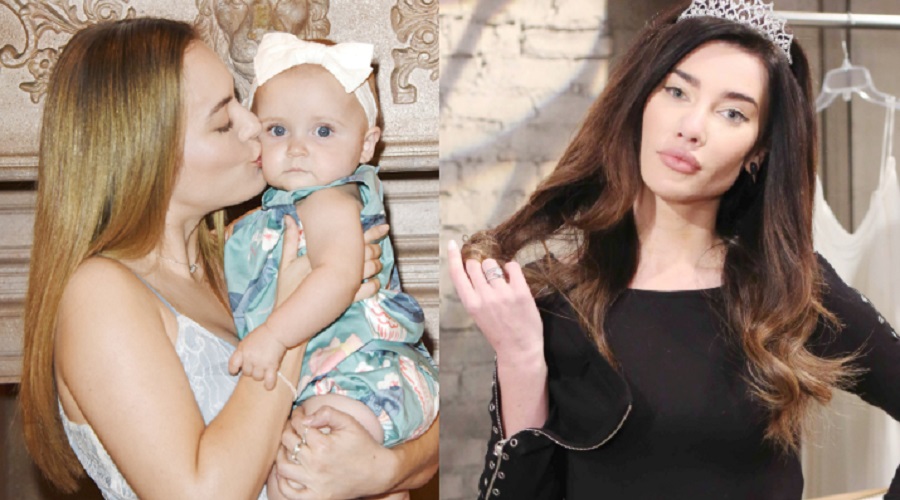 Bold and the Beautiful spoilers indicate Hope Logan (Annika Noelle) becomes guarded when it comes to Steffy Forrester (Jacqueline MacInnes Wood) after she realizes the scope of recent events. The stepsisters once had a plan for the daughters they share with Liam Spencer (Scott Clifton). But that plan now seems wiped off the table.

Bold and the Beautiful Spoilers: Hope Logan Proceeds with Caution

So when Liam takes the initiative to put that plan back into motion, something happens. B&B spoilers suggest Hope takes a step back from that blended family plan. Steffy and Hope once insisted upon raising their daughters as close sisters. But that was before Steffy became a full-time mother to Beth Spencer (River Davidson and Madeline Valdez).

Bold and the Beautiful spoilers point to a text message that Steffy sends Liam. When Hope reads it, something it says sets her off. It seems this becomes the starting point for Hope to form a tighter grip around her little family.

It doesn’t take long for those around her to notice this change. Especially Steffy, who is also a victim in the horrendous Beth scheme. But it doesn’t look as if Hope recognizes just how much her stepsister is also suffering over this.

It seems the joy over Beth Spencer coming back to Hope and Liam leaves the new mom thinking of nothing else. But life has a way of seeping back in with problems. Bold and the Beautiful spoilers put Hope struggling with a few of those problems in the coming episodes.

Hope’s baby was stolen from her and sold in a black market-type of transaction. For any other parent, the happiness of reuniting with a stolen baby would eventually give way to worry over how that baby was treated during such an ordeal.

Worries over the baby experiencing abuse or neglect while in the custody of strangers would probably be overwhelming. But Hope doesn’t have those concerns. An unsuspecting Steffy Forrester loved and cared for her daughter.

This takes that huge piece of the worry away from Hope. But B&B spoilers suggest it only gives Hope a different type of worry. Then, for some reason, Steffy’s text message to Liam sets off these different concerns for Hope.

Hope Logan didn’t get those important first few months to bond with Beth. But Steffy did. Beth bonded with who she thought were her parents, Steffy and Liam. B&B spoilers suggest there’s some animosity brewing for Hope over this.

Spoilers also indicate that this animosity causes Hope to keep a tighter grip on her little family in the coming episodes. Bold and the Beautiful spoilers suggest Liam is ready to start bonding with his girls again now that the mother roles switched for Beth. But Hope is hesitant.

Steffy Forrester has been Beth’s mother from the time she was a newborn. B&B spoilers suggest Hope is concerned that this bond Beth formed with Steffy could be strong. So while Liam pushes to form that blended family that Hope advocated for, Hope backs away.

Bold and the Beautiful spoilers promise some of that old stepsister rivalry seeping back into the CBS soap’s up and coming episodes. A mom’s love for her daughter causes Hope’s world to get a bit smaller. Steffy, who had no idea she was raising Beth feels that animosity causing her to lash out as B&B rolls along next week.

Come back to Entertainment Chronicle often for Bold and the Beautiful spoilers and updates.