90 Day Fiance: Before the 90 Days star Tom Brooks introduced Darcey Silva to his sister this week who is the polarized version of Tom’s gentle demeanor. It sure looks like this dinner with Tom’s sister Emma and her partner leaves Darcey squirming.

Before 90 Day Fiance cameras show Tom saying that his sister isn’t always on board with his past love interests. So the mood is set before the sister starts to grill Darcey and her brother about their relationship.

When Emma and her significant other sit down with 90 Day Fiance cameras, they get right to the point. Emma took one look at Darcey and summed her up. She imagined that Tom’s girlfriend would have fake eyelashes and big boobs. That’s just what she sees in Darcey Silva.

Both Emma and her boyfriend/husband tend to size up Darcey by using the word fake a few times. 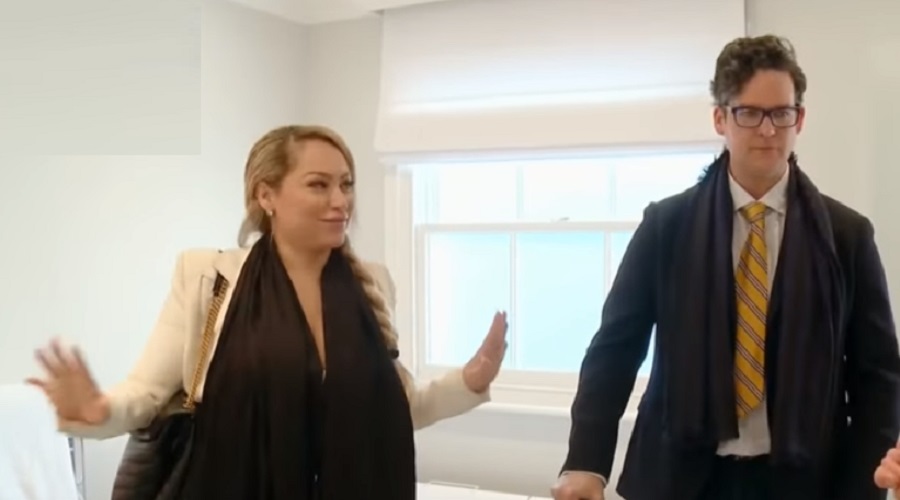 It seems the first hit for the 90 Day Fiance celeb from Connecticut comes on her way to Nottingham before she even gets out of the car. They just arrived back in the UK from Albania. This is when Darcey learns Tom is not taking her home. Despite Tom having his own place in Nottingham, he’s rented an Airbnb.

It seems his sister lives next door to him and she can be overprotective. Tom talks to the 90 Day Fiance camera and claims he’s better off keeping a distance between his sister and his US visitor. So he decided an Airbnb is the best way to go.

Darcey Silva Taken Back a Bit

This seems to put Darcey’s nose out of joint. But… she did the same thing when she had Jesse visit her for the first time in the US. She didn’t want to bring him around her family until they got to know each other. So she too rented an Airbnb.

Darcey doesn’t have the best track record when it comes to dinner with family members. A flashback reminds the 90 Day Fiance viewers how Jesse’s parents thought Darcey wasn’t in the same league as Jesse. In other words, she was beneath him. Darcey learned this over dinner with Jesse’s parents while she was in Amsterdam.

Then, of course, Tom just experienced a nightmare at dinner with Darcey and her twin sister Stacey Silva and Florian. So far things just don’t fall into place for Darcey’s plan of hooking herself a fiance. Needless to say, she doesn’t have good luck around a dinner table.

It looks like Tom Brooks, who comes off as pretty meek so far, has a sister who makes up for it. Dinner with Tom and Darcey, Emma and her partner ends on an okay note. But there’s more to come on 90 Day Fiance with Darcey and Tom’s sister.

Next week, when they have a night out for dancing, Darcey feels the full extent of Emma’s overprotectiveness of her brother. She gets a stern warning from Tom’s sister that leaves the Connecticut mom of two turning to Tom and making a promise.

For some reason, Emma angrily tells Darcey her brother will never be a “kept man” on the next 90 Day Fiance episode. Where she goes with this next week is anybody’s guess. But she’s not warm and fuzzy to Darcey at all. The hits keep coming for the woman who looks desperate to claim herself a foreign husband.

This week’s episode didn’t fare well for Darcey. Not to mention how she says “I love you” again and once again Tom doesn’t give her those three little words in return. Still, with no “I love you” coming from the man she’s desperate to marry, it looks like Darcey fights an uphill battle.

Now he presents a sister who could easily be her biggest roadblock to Tom yet. It looks like Darcey’s chances of getting a ring on her finger fade into the 90 Day Fiance sunset.

Tune in to TLC on Sunday nights at 8 pm EST for more 90 Day Fiance: Before the 90 Days.