Blogger John Yates recently shared a picture of 90 Day Fiance breakout celeb Colt and two women. He reports the woman in blue is said to be Colt’s new girlfriend who appears with the Vegas dweller in his next season on TLC.

Larissa, who finds herself without a man these days, recently posted some rather romantic photos of her and Colt together. Of course, the photos depicted the duo during happier times. They were taken sometime before they became the explosive couple on the verge of a split. Of course, it eventually ended in a split.

A few of those photos came from their wedding day, which is apparently a nice memory for her. So is that what prompted her to make fun of his new girlfriend? Maybe when Larissa saw the photo of Colt and his alleged new love interest this caused the former 90 Day Fiance diva to take a swing at her online. 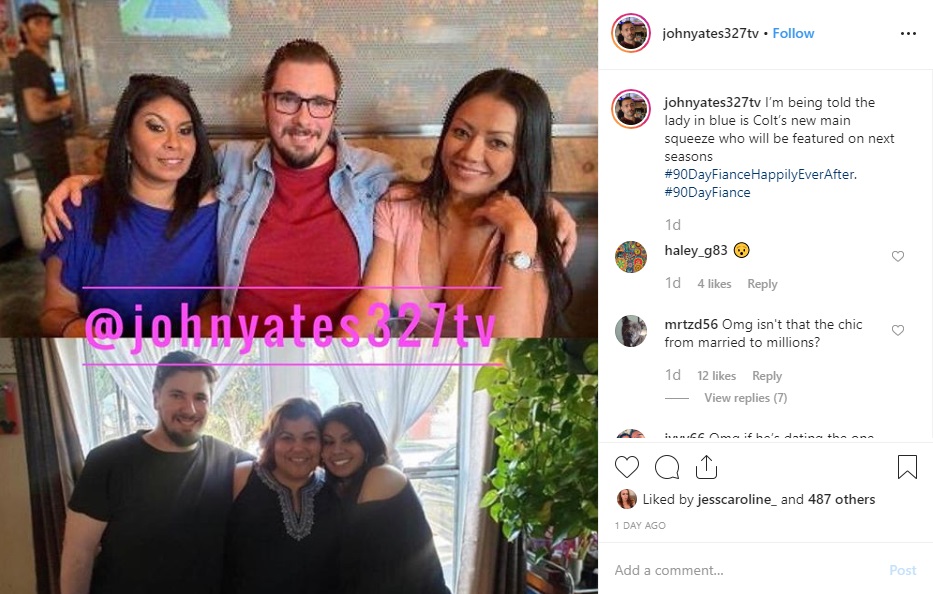 Does Larissa Have Delusions of Grandeur When it Comes to Colt?

Larissa commented about the alleged new girlfriend’s eye. When another comment popped up about the eye, Larissa plastered several of the emojis of the laughing crying face of joy.

Did Larissa think that she and Colt might somehow drift back together now that she was without her boyfriend? Especially now that Colt’s last relationship ended? Apparently Colt works fast and he even seems to have his last girlfriend’s blessing. Jess Caroline liked the photo above.

Who knows what Colt Johnson’s ex bride from Brazil was thinking but it does appear she poked fun at Colt’s newest 90 Day Fiance co-star.

Larissa’s post last week about her and Colt seemed heartfelt. Then Larissa wrote, “Life is a Journey.” She also posted a blurb about the pictures. She said, “Your life can change so much in just the year”. “Since you ask me always show old pics of pastee here is a throwback for Thursday of me and my ex.”

While Larissa reminisces, it sounds like no grass grows under Colt’s feet. Not only does he have a new girlfriend according to reports but she’s going to join him on a new 90 Day Fiance season of some kind. Colt and his mom Debbie keep the masses entertained right now with the 90 Day Fiance Pillow Talk.

Is Colt slated for the next season of that show or is it another show like 90 Day Fiance: Before the 90 Days that suits them better? So, for now, it looks like Larissa can laugh all she wants but Colt seems to be doing just fine for himself.

Fans of the mother and son duo, Debbie Johnson and Colt, will surely tune in with fingers crossed. Whoever Colt’s new love interest is, she’ll just have to get along with his mom. It seems Mother Debbie is another breakout star from the show’s franchise and many fans just love her.

There’s no love lost between Colt’s mom and his ex-wive. Larissa moved in and just mowed right over her mother-in-law. But again there are two camps on what went wrong between these two and they offer polarized theories.

Check Entertainment Chronicle often for the latest on all your favorite reality shows like 90 Day Fiance.