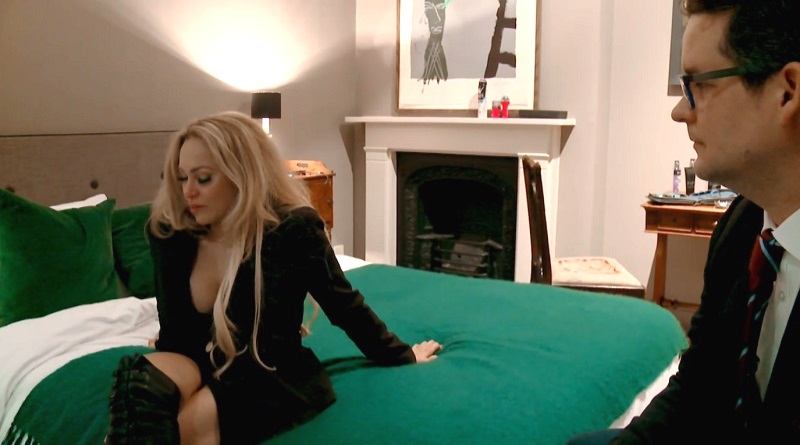 It looks like Darcey did just what her sister Stacy and friend Reina warned her about before she left for London. They told her on a recent 90 Days Fiance episode not to move too fast.

It doesn’t look like Darcey realizes this but from what Tom says next week, he sees her behavior as a turnoff. She lands in London and almost immediately shocks Tom with her actions.

Tom tells the 90 Day Fiance cameras he doesn’t find Darcey’s behavior very becoming. So far this is Tom’s first episode other than the Facetime between him and Darcey that fans were privy to.

Many fans offer their first impression – the guy’s a gentleman. Instead of assuming he’d bed down Darcey right away, he did the gentlemanly thing. Tom rented an Airbnb with two bedrooms and moved into one. Then he put Darcey in the other.

Once again, Darcey awaits a yeast infection. This time, could be the swim/body suit and/or contracted via airport bathrooms. #90DayFiance #90dayfiancebeforethe90days pic.twitter.com/6f4eO28Hev

Darcey’s insecurity emerged in full force when she learned she wouldn’t be sharing a bed right away with her 007. Tom told her he thought they’d get to know each other before he attempted a night of heavy romance. He said this out of respect for Darcey. But she saw it as maybe he wasn’t sure about her. If he wasn’t unsure at the time, he was later on once she got going. He basically said as much to the camera.

Acting like a baby, with a few baby-like gestures, she plunked herself down on his bed. Tom wasn’t sure what to make of it. He sat in a chair and watched her in amazement and probably shock.

He thought his 90 Day Fiance partner wanted his room instead of hers and he was happy to make the exchange. So he asked her. But that’s not what she wanted and she gave him a big – No. Darcey wanted to sleep with him and not in separate rooms.

Did Darcey Force Tom to Sleep With Her?

Darcey Silva turned on the waterworks, which is a scene 90 Day Fiance viewers got used to through the seasons. This time her crying turned into an embarrassing scene.

She did this to get her own way. If she wasn’t embarrassed, the people at home will probably be embarrassed enough for her after they see the scene. Darcey Silva was enough to appall even the veteran viewers of the show in this scene.

Tom finally agreed to sleep with her only because she was so upset. Is that any way to snag a man? Tom didn’t seem too sure of this relationship when speaking to the 90 Day Fiance cameras.

Tom Brooks didn’t find her tendency to be emotional particularly attractive, which is what he told the camera. The handsome Brit also shared that he felt like he was babysitting at this point.

He didn’t hold out too much hope for what he saw as a romantic getaway with Darcey for a few weeks. After this week’s scene of Darcey in the airport bathroom fans of 90 Day Fiance took to social media. One fan summed it up by saying – no matter what Darcey did in the bathroom, which is seen in the video above, she still can’t mask the smell of desperation.

Be sure to come back to Entertainment Chronicle for all the spoilers and news for your favorite soaps, reality, and TV shows.